Sitting on the bus the other day on the way home from town I was really quiet appalled by The lack of consideration given to out elderly population.  I dont know about you but I was brought up with I like to think a modicum of good manners.
There were a group of I can only describe as low life's..... of I don't know maybe six or seven mostly lads. but two girl's were sat with them age's ranging between 14-18. The language was blue  and Rory my youngest he is sixteen but has learning disabilities was about to chime in and tell them all to be quiet.  I could see he was becoming agitated when at the next stop the bus pulled in, and let on a lady called Pauline.....well we know Pauline as she lives not far from us. So telling Rory to offer his seat I motioned for her to come and sit next to us which she started to do.  As she walked towards us One of the lads stuck out his foot to trip her up as the bus was about to move she went flying but for Rory who was standing close by she could have hurt herself really badly but he broke her fall she grabbed onto him and all was well . The youth's thought it was hilarious while Rory and I made sure Pauline was al-right the rest of the bus including the Bus driver ignored the incident ........Not Rory who went over and  told them off the way only Rory can I should mention to those of you who may not know this Rory has little or no speech and for the most part use's sign language. This was like waving a red flag to a bull as now the Group had someone to really take the Mickey out of.  Still the  rest of the bus did or said nothing. Things were starting to get out of hand and Rory with all the stubbornness of an terrier was refusing to let things be the teasing towards him had escalated  with the whole group signing that he was crazy. and doing their own version of signing with various fingers.......excusing myself from Pauline who was still a bit shaken. I walked over to were the Youth of today sat and addressed them all collectively
What If this was your Brother......or sister someone was taking the mick out of . Or your Mother someone had tried to trip. What if your Mother had fallen and had to be hospitalised because Someone like you thought it was a good game........and laughed as she fell. The two Girls did have the grace to look shame faced the lads I'm afraid thought it was a riot and carried on the teasing. But by this time Rory had gone back to sit with Pauline. We continued on our journey with the odd evil look being given from both sides. Pauline Rory and I got of the bus and quiet a few people muttered to us well done as we were leaving. My question is why oh why didn't they help us while we were on ther?. Are we so afraid to help each other now that we turn the other way........I for one hope not and will continue to support those who I think are vulnerable.......As we got of the Bus Pauline who had by now regained her composure was telling me that she had been to have her hair cut. Remarking how nice it looked and how on trend the different colour dyes are for hair nowdays. I should also mention that she is one of the Blue rinse brigade.....so with Shades of blue in mind I would like to dedicate this card to Pauline.........And the disaster was that the bus incident I hear you ask well no it wasn't while making the card I have somehow broken the top of the cuttlebug wre the roller goes straight down the middle I dont know how or why I have used it loads of time and never ever had a problem but today when the die was over halfway through I heard the most  dreadful crack and the cuttlebug seized up would move forward nor backwards then I noticed the crack Have phoned Ideal world and they are going to send a carrier to pick it up Monday but cant give a time......Praying for a replacement I use the cuttlebug a lot so will be lost with out it...........Boo Hoo!  Anyway enough waffle, hope you like the card. As its Shades of blue I thought I would enter it in this weeks MONOCHROME CHALLENGE on the Crafty Bloggers Network.
Ingredient's for the card are;
One piece of A4 Blue card cut 10x6 inches.
One blue patterned piece of paper from stash cut slightly smaller than A 4 and put aside to trim later.
Madeline Stamp from Barbara Grey's Clarity stamps.
One white piece of card to stamp onto.
Momento grey ink.
Some prima flowers in blue.and white.
As many Blue pro makers as I could find!!!
Glossy accent's to finish.
Two of the largest spell binder scallop circle die's 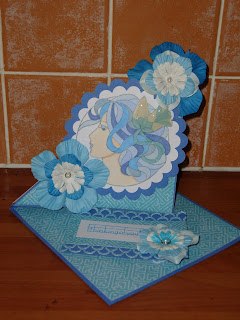 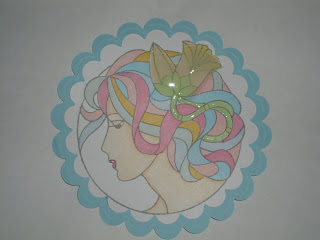 I folded the Blue A4 card in half and trimmed the blue card till it looked square (ish I tend to work by eye and not bother measuring)  but for the purpose of the challenge when I measured the now Square (ish) card it was 6 inch square......I then cut the white card with a spellbinder die on the now broken cuttlebug. Using the scallop die that was the second largest ...saving the largest one to cut the piece of the blue card that I was going to use for matting the finished topper. Stamping the image on the white scallop circle I put that to one side to dry. Then set about trimming the Piece of co-ordinating paper that would cover the inner and outer part of the card. Bear in mind the paper is from a scrapbook stack I have had for a few years so it's a 12x12 square I cut it in half and put one half back in the box of bits to be used another day. Went back to the now 6X6 card  then turned it on it's side and cut in half again I now had two bits both 6x6. Taking one of the piece's ......Which is now a square I trimmed of two side's just a smidge just so as it would fit in the card and leave an outline then took the second bit and did the same.  With the same bit turn it on itself so as to make a diamond and cut across the diagonal  line  you should now have two triangles. Fold the Front of the Blue card in half along the diagonal to make a triangle, and glue the two triangles to the front of the card making sure you leave the crease showing so the card can open and close. Now the colouring ........What the heck just go for it Maria Simms has done one similar with this stamp, and  as well as Pauline's hair-do that gave me the idea.   Maria's card is more soft and  Dreamy with Pinks and soft hued Aquas and Mustards go take a look on Barbara Grey's page on Facebook mine is more on trend I think with all the different colour's of red and purple pink and indeed blue colours that are out there at the moment I did use a skin colour on her face for which I hope I will be forgiven I couldn't leave her White she looked like a ghost! I did try her with a very light blue face thinking I could do a moonlight scene but that didn't work either she looked like an alien!  Added some glossy accents to her eye lips and the flower for effect and then just stuck her on the card with some Primas. the word stamp was one I picked up from  a bundle that he local shop was selling in a bag cheap. Many thanks to Pauline for her company Maria for her model and you guy's for taking the time to read the drivel! hope you like it
Posted by Bernie Simmons at 4:48 pm 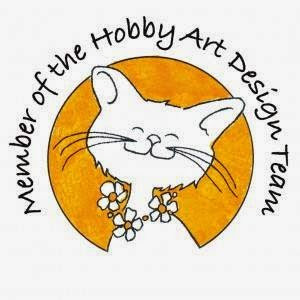